Different kinds of Clay and the LUTUM® extruder.

Questions about the Clay 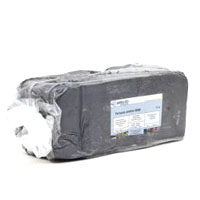 The power of material use is a combination of physical appearance, its mechanical properties and the solution it’s used for. Our favorite is stoneware clay. Stoneware is a type of pottery which is impermeable and partly vitrified but opaque. It is made from stoneware clay fired to high temperatures. It does not require glazing. Its water absorption is less than 1 percent and is greyish in color.

Stoneware is made from a natural occurring clay tape. It consists out of different amounts of kaolinate, mica and quarts. Impurities are present and the reason for the grey look of fired material. The base material is also known as ball clay.

“The name ‘ball clay’ is believed to derive from the time when the clay was mined by hand. It was cut into 15 to 17-kilogram cubes and during transport the corners of the cubes became rounded off leaving ‘balls’. The ceramic use of ball clays in Britain dates back to at least the Roman era. More recent trade began when a clay was needed to construct tobacco pipes.”[1]

The stoneware Vormvrij | 3D uses is Traditional stoneware. It can be fired twice if the end produce needs to be glazed. First burn is around 900 °C and called bisque firing. The second one, to form the layer of glaze on the product, called the glost firing, is around 1250 °C.

First examples
The earliest examples of stoneware have been dated back to at least 1900 BC at the Indus Valley Civilization. An industry of a nearly industrial-scale mass-production of stoneware bangles flourished there throughout the civilization’s Mature Period between 2600 to 1900 BC.[2]

Another early form of stoneware has been found in eastern China Zhejiang region at Deqing. From the various definitions of high-fired ceramics, it is agreed that these early brownish olive glazed stoneware products were from the late Shang dynasty ( 1750 BC – 1122 BC). Large quantities were eventually produced by the Han dynasty (202 BC – 220 AD).[3]

Can I use local clay to print with?

yes, you can.
Most clay types need to be diluted with some water to print properly. There are many factors that dictate the correct viscosity for your project. It depends on nozzle size, print speed, ambient temperature, local humidity and the shape of the object you want to print.
There is a wide variety of clay mixes you can use. It’s best to follow the clay mixing manual that came with the printer and build upon it yourself. 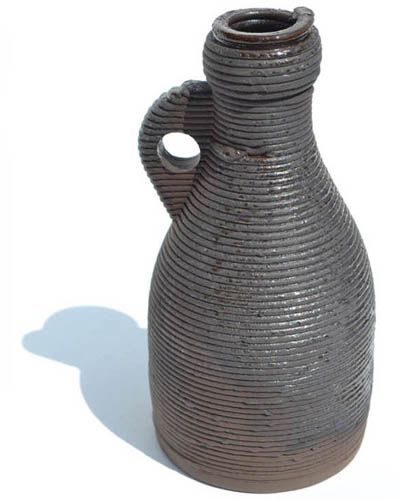 What is the best clay to 3d print with?

The best clay to start with is Stoneware (ball)clay with 25% grogg at 0.2mm.  It is very easy to print and is workable with a very wide range of viscosities. Because you can fire this clay at vitrious temperatures the final object is strong as the different print layers have properly fused together. 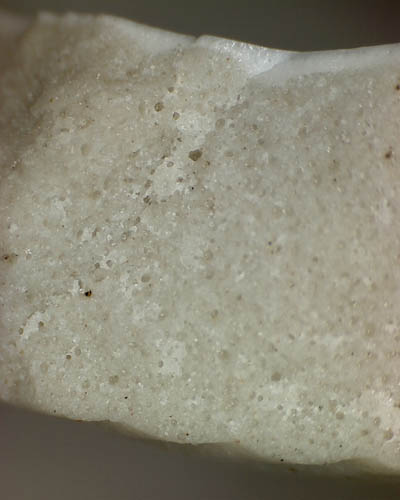 Can I 3d print porcelain?

Some clay types, like porcelain clay need special treatment or a different Auger in the extruder.

Porcelain needs additives to get the right viscosity for printing. Because there are many varieties of porcelain we can’t advise on the right additives, you will need to research this yourself and create your own unique clay mix you can print with.

There is also the option to purchase premixed porcelain for 3dprinting from Imerys Ceramics. They have a line of clay formula especially for LUTUM printers.

EZ porcelain from Imerys
What Other clay types and colors can I use for 3d Clay printing?

You can choose different clay types like terra cotta or black earthenware for printing. Most of these types only need a small amount of extra moisture to become printable. You can also add pigments to get exotic results.

Pictured is a cross section of a chard of black pigmented stoneware clay. 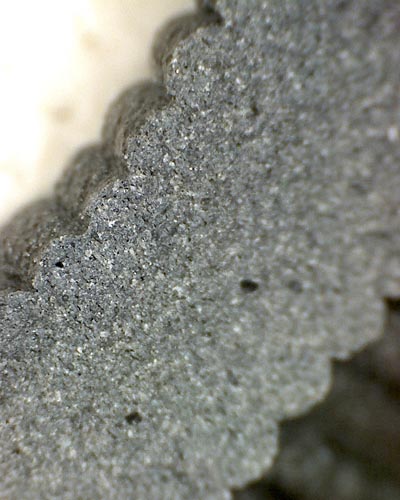 Can I glaze 3d printed ceramics?

Yes, any regular pottery post processing of greenware or bisque is possible with 3d printed ceramics.

Pictured is a 3d ceramics piece that was lightly sponged after printing, then glazed with white glaze and partly sandblasted to make a matt surface finish. 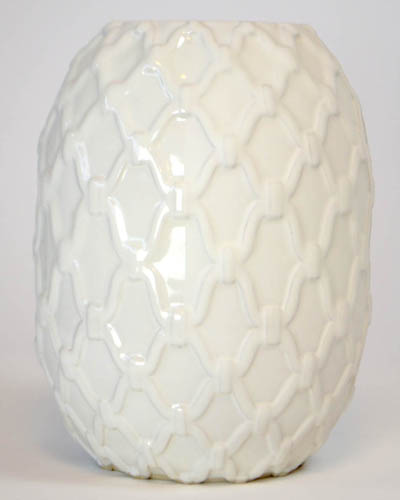 Can I sculpt or connect parts together after printing?

Yes, 3d printed clay is still regular clay. Depending on the viscosity you might need to wait a few hours before your do any manual post processing.
Sometimes it’s good to print extra surface layers to make the object strong enough for post sculpting. 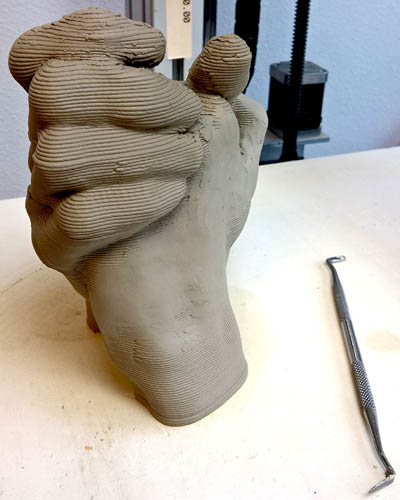 VormVrij®is a Limited Company (VOF) based in the Netherlands.

It is fully owned by the two Founders, Yao van den Heerik and Marlieke Wijnakker.

‘Vormvrij’ means ‘shape free’ in Dutch, the core value of this company.

VormVrij®, LUTUM® and BRUTUM® are registered trade marks.
Contact us