Development of the LUTUM® Auger system.

I often get asked why we designed our printer the way we did. Why we use air and auger for clay delivery, why our printer is black, why we want to print with clay. Today I am going to answer just one question.
The extrusion technology and the idea behind it.

As you may know there are currently several solutions to 3dprint with clay. In 2013 there were not many options. Continuous flow extrusion by air was mainly used. Results were often rough and very craft like in appearance. While some developed a more controlled extrusion with auger or piston style systems it did not reach sufficient print results to go mainstream.
Today, most people starting with clay prints on DIY printers still start with similar continuous flow principles. It is simple, cheap and easy to design. But there are limitations to what can be printed on such a setup.

When we started 3d printing clay we quickly reached the end of diversity in our prints and within a few months of experimenting we found that consequent designs were all adaptations of earlier solutions. While stacking helped to extend possibilities, it was not what we had envisioned as proper 3dclayprinting. It became clear we needed to redesign the way we could control clay output to reach a level of printing on par with regular 3dprinting. 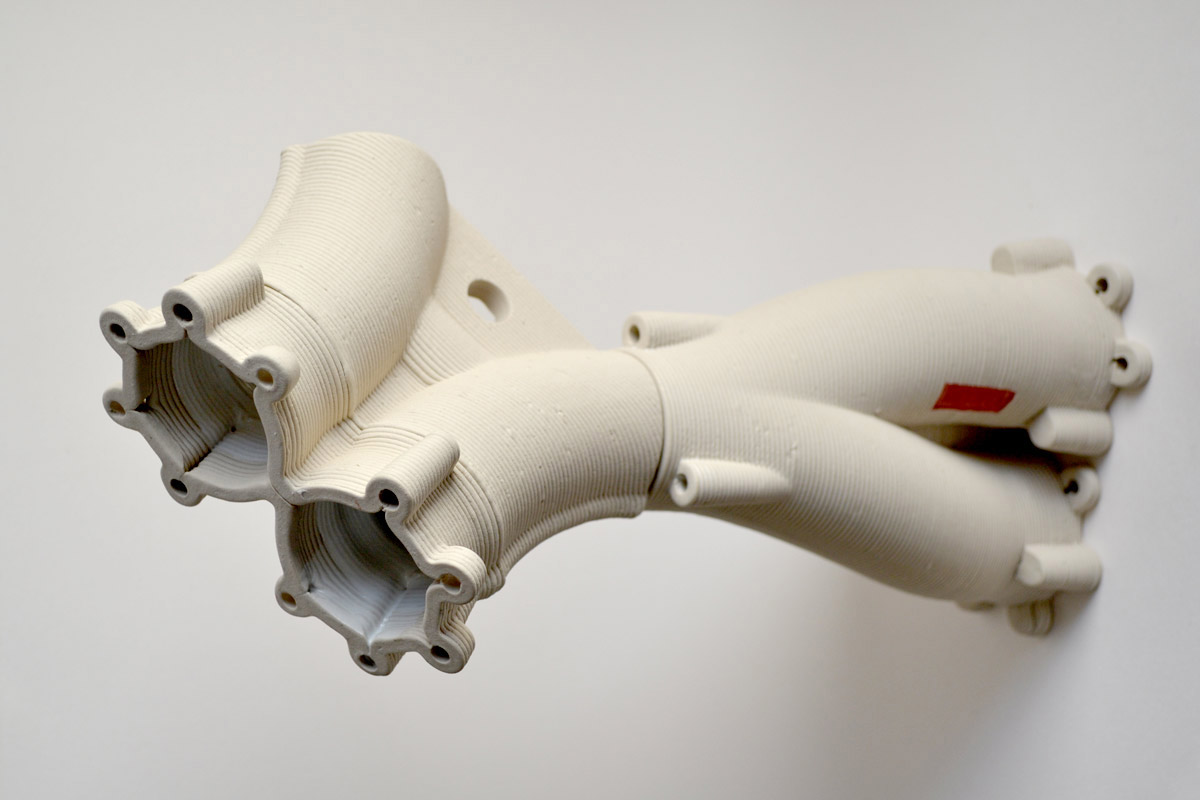 While we did not intend to commercialize this technology there were a few restrictions we had to consider if we ever wanted to upgrade our printer. We wanted high precision and controllability but it also had to be cheap, safe, reliable and producible.

At first we made cheap prototypes from simple bits and pieces found in hardware stores. The proof of concept of auger extrusion was shown fairly quickly but the print results did not meet our own standards. We decided to invest more funds and designed an extruder from scratch. 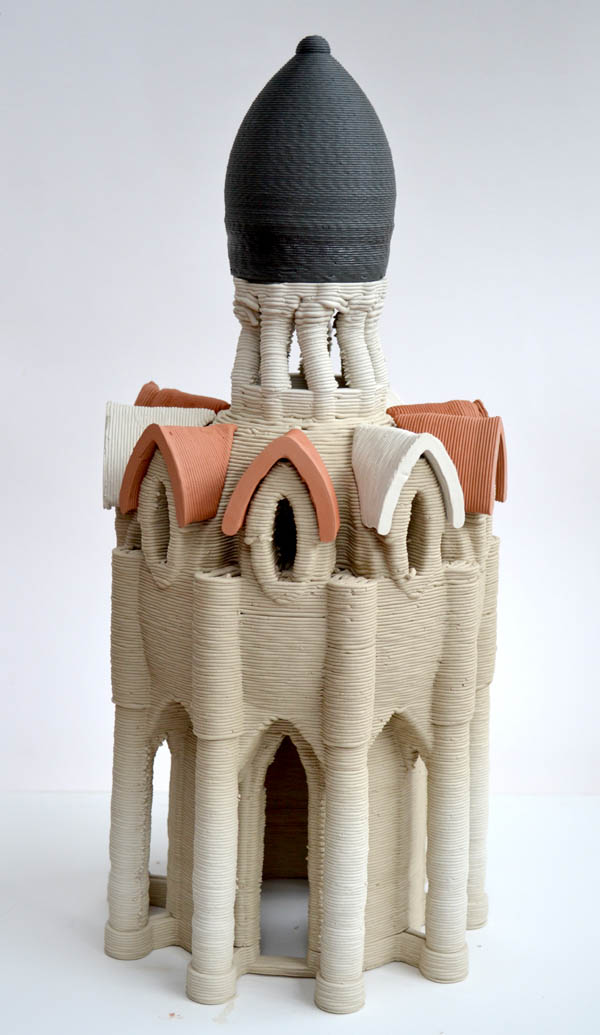 2015. Print results from the v3 extruder made from standard parts

The first challenge was the production volume. Not the clay prints produced by the printer, but the actual extruder itself. For example, to create the auger of the extruder we had to contract a specialist CNC lathe company. An auger would become much too expensive to make unless we would order a few hundred at a time. That was not an option, it would halt improvements. The only solution present at that time was to 3D print the metal parts. This was more expensive per single print but gave us the possibility to gradually improve our technology without huge initial investments.

Since XYZ movement was already established with the first continuous flow printer the focus could be on the extruder.
We kept the Large Clay Vessel and compressed air as we had a lot of experience with such a simple delivery system while printing without an Auger.

At that point five factors that were crucial to get a good extrusion.

To keep the design flexible and simple we opted for manual air and manual adjustable rotation settings via firmware of the printer (this was a feature already embedded in the software and sufficient for our needs). This solution fixed the nozzle width per gcode design file but flexibility towards the properties of the clay. For single walled prints the nozzle size could still be variable. And stacking two extruders would give us the option to print with more colours or materials. Something unique up to today. 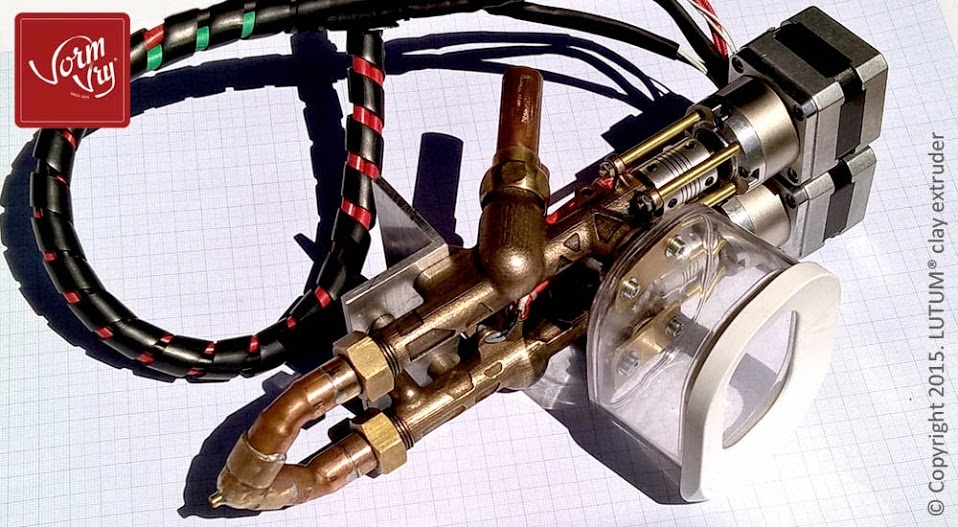 The motor requirements were quickly established as a regular 4Newton had a hard time to move the clay, especially with large volumes. A larger motor would increase weight while only giving a little more strength. A geared motor proved the best solution.

The way the clay is fed to the auger was also found reasonably fast. It’s slightly different to regular Auger systems where material is fed in a type of trough where the auger turns at the bottom. In this case the auger had to cut away clay to be transported to the tip. We had to make a feed area as large as possible and a cut of section that would not give too much friction.
The first Augers had a double or triple helix to cut the clay in small sections and give maximum torque downward to the end of the extruder into the nozzle.

The first extruders were hard to clean, they were made from 1 fixed piece with the motor bolted on top. The auger had to slide downward through the barrel to be cleaned. If it got stuck you would have to disassemble the whole thing to get it going again. The v5 iteration solved all those issues by braking up the extruder in separate detachable parts.

The tip and seal of the system had to be made from standard parts as those would wear or damage first. To release the pressure on individual seals we decided to spread the load by using three seals in sequence. Grease mixed with clay would act as the bearing and pressure cushion around the shaft. 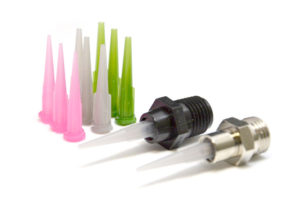 It turned out that the tip at the end of the extruder was responsible for much of our frustration during the design process. Since we started with continuous flow extrusion we really appreciated the freedom of nozzle size to dictate the width of the extrusion.
This freedom had to be translated into the new auger based design.
Unfortunately tip size has direct relation to the pressure needed to extrude clay. The smaller the nozzle the higher the pressure at the end of the auger needs to be. If the clay is not the right viscosity this pressure could result in segregation between clay particles and water.
Water would be forced up and dry clay would go down clogging the system and 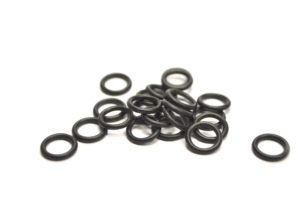 worsening the situation. On top of that particle flow dynamics around the auger itself also make things difficult.
Our first design still had to use fairly soft clay. Because we used tubed delivery this was not an issue. Our first line of extruders were performing well. They would extrude clay fairly constant, had no particular signs of wear (apart from the occasional seal) en were easy to operate.
But the results were still not perfect. Air bubbles and other irregularities in the clay would give errors in the print We did not want.
Don’t get me wrong, I love the randomness of clay printing, the results of poorly mixed clay can by quit fascinating. But from a technological standpoint one also had to be able to print perfect, all the time for days in a row if this machine would become a reliable partner in any production facility. 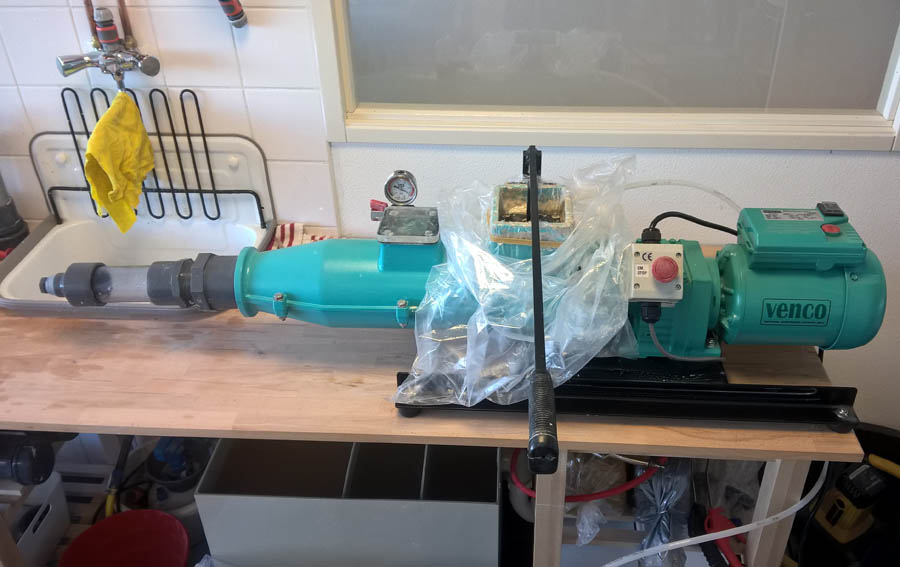 So we turned our attetion to clay and how clay was prepared normally. Immediately pug mills and hand presses came into view. Most ceramists had one of these ready and while we recognized these as a practical solution to mix and de-air clay, the viscosity was very different compared to the clay used in Air and tubed delivery.

We had to move the clay closer to the Auger and developed the Micro cartridge for that purpose. This proved a fantastic solution, the clay would enter the Auger with much lower pressures compared to our tubed feed system. And without the tube the clay latency by compression went almost to zero resulting in even better control.

Prototype v7 extruder (did not go into production)

We also addressed the way the motor an and its data connection was detached from the Printer. The extruder had to be cleaned every one in a while and the data socket was the most fragile part of the entire printer. An RJ45 plug solved the danger of damaging the small standard connector. The RJ45 socket was fixed in a nice and robust plastic cover attached directly to the different motors. 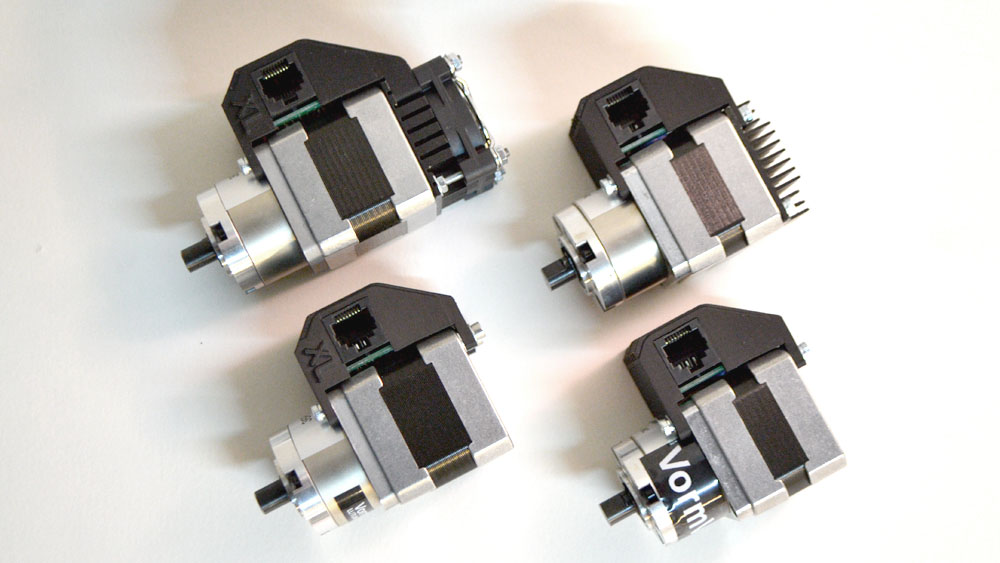 But we also had to redesign the Auger to cope with this tougher material. It took another few weeks to get the correct design conditions and build an Auger that would properly move hard clay down a tube. We did realize that the difference between grogg and hard clay was smaller compared to our previous viscosities and to our delight we could push grogged clay with the same ease as regular clay.

Our new extruder design in combination with the small cartridges holding about 1kg of clay has given us a tremendous freedom in design and we feel we have reached almost the same level of control as printing with plastics. Of course clay has it’s own particulars, like shrinkage, gravity, vibration and climate sensitivity, but when taking those conditions into account we can almost print everything. 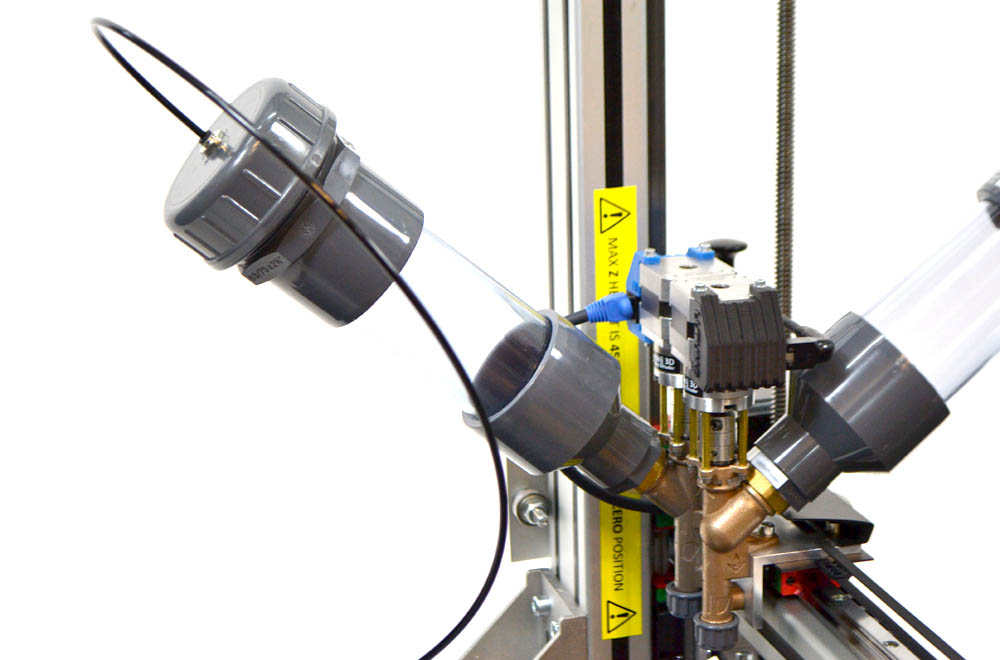 A disadvantage of this solution is the need to regularly swap cartridges. Especially when printing a lot or large objects. If the clay between swaps is of different consistency this will result in an obvious seam. Great care is needed when preparing clay and cartridges need to be numbered to minimize seam issues.

Switching a cartridge takes about 15 seconds. Another minute to normalize pressure in the tip. Using the swap cartridge feature in the firmware to expel contact air and excess water reduces print irregularities. But that is a different story. 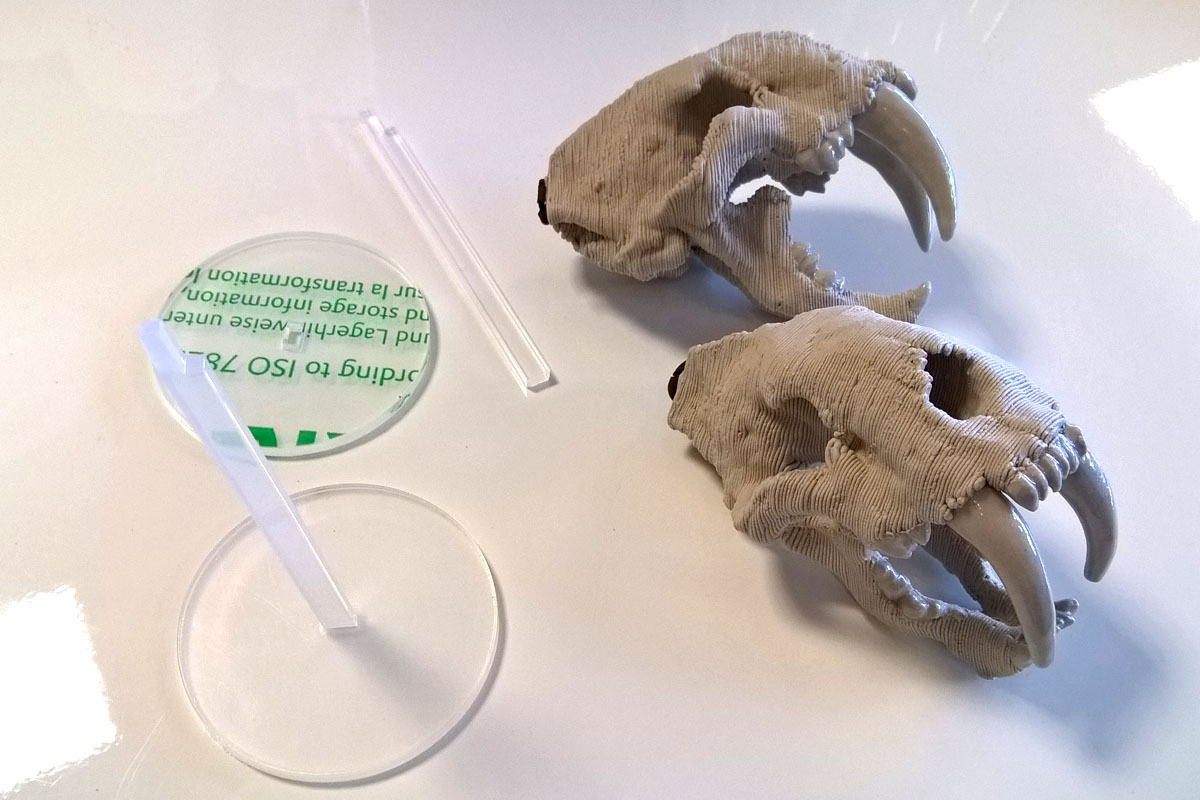 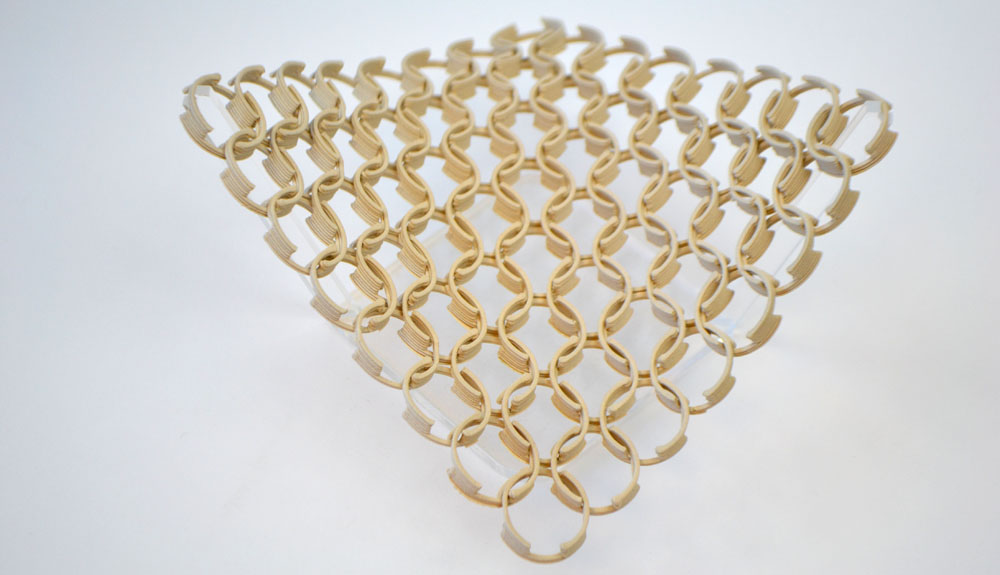 The Auger system is a complex system but delivers good control over extrusion flow while keeping costs within limits. Start and stop sequences are easy to execute. Printing objects up to 1kg (750cc) of clay is straight forward. There is the possibility to print larger pieces but that requires additional actions.
Compressed air is used to move clay to the extruder. Since almost every serious ceramics studio has compressed air, most times there is no need to invest in a separate compressor.
Nozzle size is variable but only up to around 7mm diameter. This system is optimized to create objects of small to medium size.
You do need a de-airing Pug mill to get ultra quality prints. Compare it to filament quality, good filaments give better results. The same goes for clay. 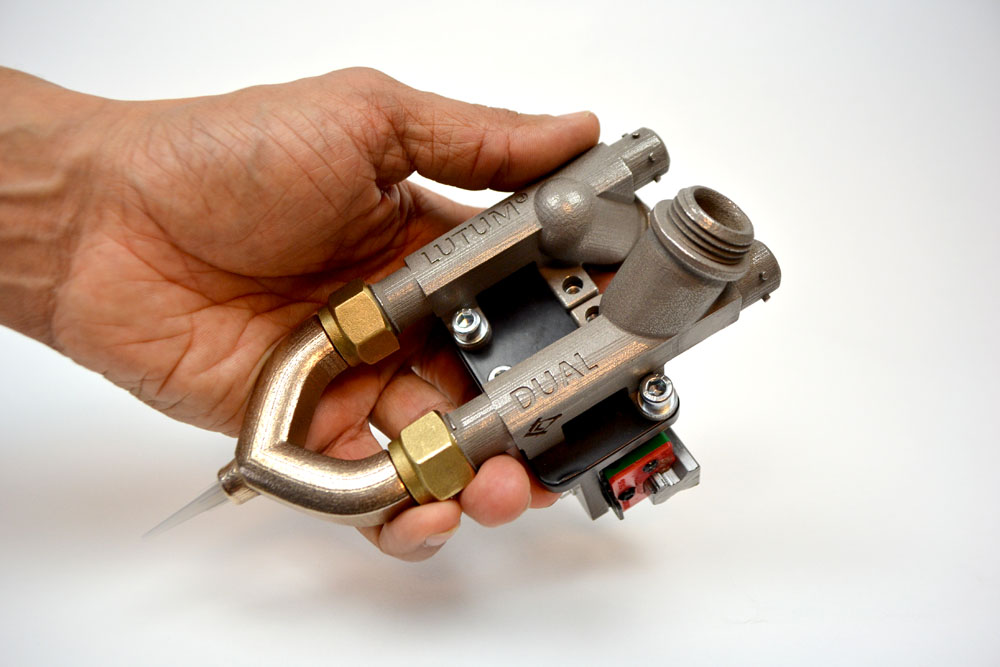 VormVrij® | 3D was established in 2014 as a 3dclayprinting company set to change the landscape of clay manufacture. It is owned by Yao vd Heerik and Marlieke Wijnakker and operates from the Netherlands. They have a small Line of dedicated 3d clay printers and perform research in the field of clay extrusion by means of auger in combination with compressed air driven clay supply. Their customers are Ceramists, Arts schools, Universities, Fablabs and Research Centers around the world.

Editorial: Seremik is the St. Gallen-based Rapid Pottery plant that was founded by Olaf Egner By: Admin, Semerik Swiss, Images provided by Seremik Swiss and public record. Ceramics can be useful for many reasons – as a vessel, tool, as an object of memory, as an expression of a devotion to craftsmanship. OIaf sees his […]

Editorial: Seremik is the St. Gallen-based Rapid Pottery plant that was founded by Olaf Egner By: Admin, Semerik Swiss, Images provided by Seremik Swiss and public record. Olaf experiments in his Swiss studio with ceramic housings and vessels for electronics, lighting and audio. One of Seremik’s central goals is the development of open ensembles, in […]